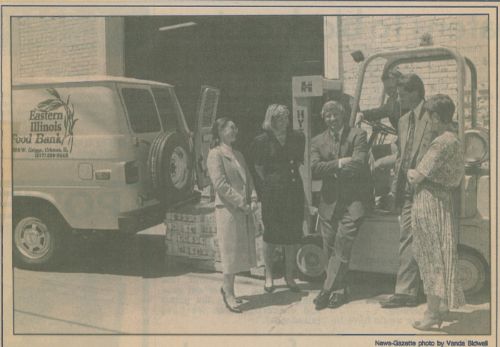 In June of 1983, the Eastern Illinois Foodbank opened its doors in downtown Champaign, in the building formerly occupied by Sears. During its first year, the new EIF warehouse distributed about 30,000 pounds of food. Initially, just a few food donors gave nearly all the product that the Foodbank distributed—and there was very little community-wide effort to help the fledgling organization stock its shelves.

All that changed in 1987, when members of the Junior League of Champaign-Urbana piloted the first Food for Families drive. In its inaugural year, the drive raised an overwhelming 84,000 pounds of food and marked the first major effort to gain grassroots community support for the Foodbank. The Junior League would continue to operate Food for Families on behalf of the Foodbank for more than a decade, working with key media partners and other supporters to grow the drive bigger and bigger each year. Food for Families is now the largest combined food and fund drive in the region.

Since then, support from the community has grown every year. Today, EIF distributes more than 10 million pounds annually on a budget of just over $3 million. Food from the Eastern Illinois Foodbank’s warehouse reaches 120,000 people visiting 167 agencies and programs each year.